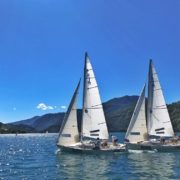 The sixth edition of the Youth Match Racing Worlds will be hosted on Lake Ledro in Trentino, Italy, from the 3 – 8 July 2018.

The Notice of Race (NoR) for the 2018 Youth Match Racing World Championships, which outlines entry requirements, sailing rules, course information and event formatting, has been released.

The competition will feature eight J22 class boats and sailors competing will have to be under 23 years old on 31st December 2018.

Boy’s crew will have three sailors, including the skipper and mixed crews as well as Girl’s crew will be four, per boat.